It's All About Relationships

My first headship saw me make more mistakes than I care to mention. It was also the period of my steepest growth and most valuable learning—starting with the headship interview. As part of the process, I was asked to lead an assembly and attempted to deliver the ‘long spoons’ story—Google it if you haven’t used it before, it’s a good one—just don’t do what I did! On this occasion, it resulted in 250 pupils scrambling for sweets across the hall, all health and safety protocols abandoned as governors watched in shock, clip-boards quivering. Remarkably, they still appointed me—something which I will be forever grateful!

The first two years were a bit of a mess to be honest, but they set me up to understand the power of relational leadership. Having taught through the introduction of the literacy and maths hours, I was obsessed with national strategy implementation—the flat-pack-furniture-approach to school improvement. This involved measuring anything that moved and lessons were timed to the minute. Teachers were judged and graded, depending on how slickly they could manipulate a counting stick or wave number fans around. Staff meetings were instructional—the milkman delivery method of training, rather than a design model. As for recruitment, I appointed teachers like football managers sign new players: SLEs, ASTs, expert professionals were all on my shopping list. Star signings were unveiled to parents, staff and governors with great fanfare. To my cost, I learned this doesn’t always make a cohesive team. I had unwittingly created a school culture crammed with Galácticos who didn’t want to play together! Some were expert teachers who preferred to teach with doors closed and had a similar mindset towards learning. Far better to have a school full of open-to-learning novices than closed-to-learning gurus!

Over the next ten years, I slowly learned that school improvement is about much more than strategy. Schools are complex, adaptive organisations, bound by relationships at every level. Bannockburn Primary School became a centre of excellence not by mandating change, but because we grew to become network and story-focused. By networked, I mean the way in which collaboration between teachers, schools and across the system defined our work. On multiple levels, staff developed agency to make a bigger difference and worked closely in teams to support each other. Planning lessons became intrinsically social and organic. Ideas for lessons grew from putting children’s needs before what was in the schemes of work the government produced. By 2011, the school expanded its roll by another 2 forms of entry, we became the focal point for the community, began supporting other schools and opened our doors to share best practice. By giving away our best school improvement ideas, it forced us to create new ones. Staff recruitment concentrated more on mindset rather than talent, which enabled us to strengthen relational leadership, building strong teams who worked for each other.

Stories in relational leadership are important; they have the potential to bind people together, connecting beliefs with action, engaging people emotionally, necessitating inter-dependence. The most sustainable school improvement occurs when everyone sees themselves as investors, owners and creators of change—a very different approach to the national strategy days of instruction. Storytelling schools create a values-led approach to the organisation of learning, including:

1. Recognising that learning communities are created when we concentrate on people’s gifts rather than deficiencies

2. Engaging all staff in the process of a common vision

3. Understanding that success depends on everyone achieving

4. Knowing that sustained improvement is achieved only when learning communities are given the power and permission to act

5. Realising that lasting success is gained by harnessing social capital 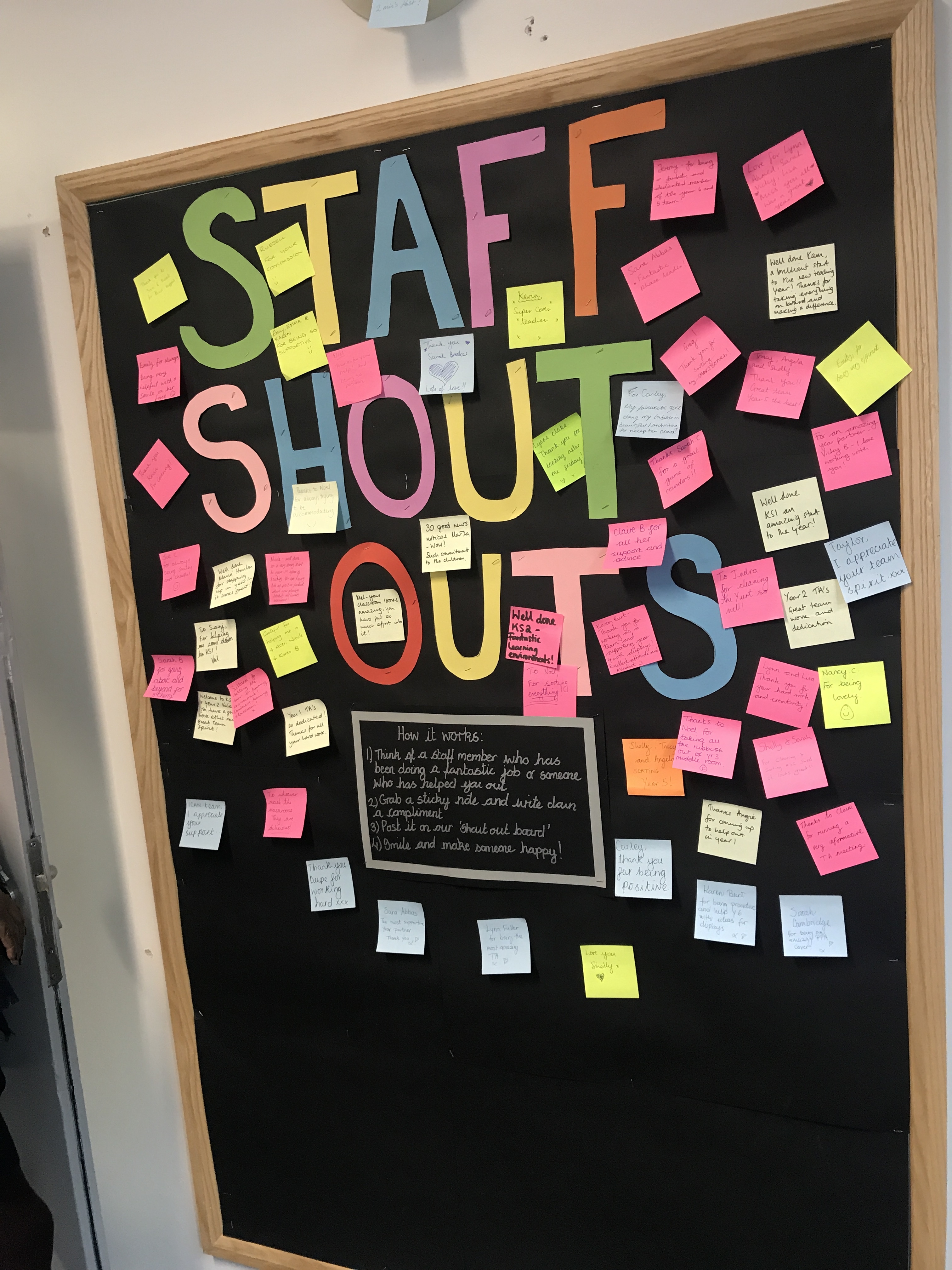 This matters even more because education attaches such high status to measurement of outcomes, which can stop us from focusing on what is harder to measure but which matters just as much. High-stakes accountability has resulted in schools learning that survival depends on maintaining good results, sometimes at a cost. We have been suckered into a pre-occupation with cognitive development—linear, sequential, easier to measure—than more abstract, but equally important, concepts like self-regulation, motivation and collaboration. Education reform has been framed around accountability and test outcomes, leading many schools to game the system in order to maintain a cognitive illusion of success. It has encouraged us to view pupils as objects to be counted—we ask what can pupils do for us instead of questioning what we can do for our pupils. It has been used to self-justify and reinforce political preference, reducing pupils to the outcome of a test. Schools obsess with data reporting for external accountability.

It is the combination of psychological safety, an openness to making mistakes and a shared commitment to organisational success which leads to an environment where everyone thrives. This necessitates that schools pay as much attention to staff behaviours, attributes and the quality of relationships as they do data outcomes.

Combined, these behaviours create belonging and increase trust. We learn to appreciate that success is a shared process, dependent on the work of the team, rather than on the individual. We also develop a more powerful understanding that delivering change is often not a linear or a simple transaction, but is bound by interaction. It is our circle of influence which determines whether we get more things right than wrong. In other words, if we spend more time nurturing ‘culture’ rather than measuring success through the narrow lens of harsh accountability, we are far more likely to create an environment where everyone achieves. Indeed, that is exactly what was highlighted by the 2017 Inspiring Teaching report. They compared other studies about the link between inspirational teaching and its effect on learning. Teachers who participated in the study demonstrated several key components including:

■Use of praise for effort

In effect, it is the climate and culture created in classrooms which determine outcomes for young people, as much as the subject knowledge or quality of differentiation. Daniel Coyle defines this in The Culture Code as:

Relationships focused leaders are conscious of bringing more light than shade.  They recognise that the true impact of achieving goals are underpinned and defined by interaction rather than action. 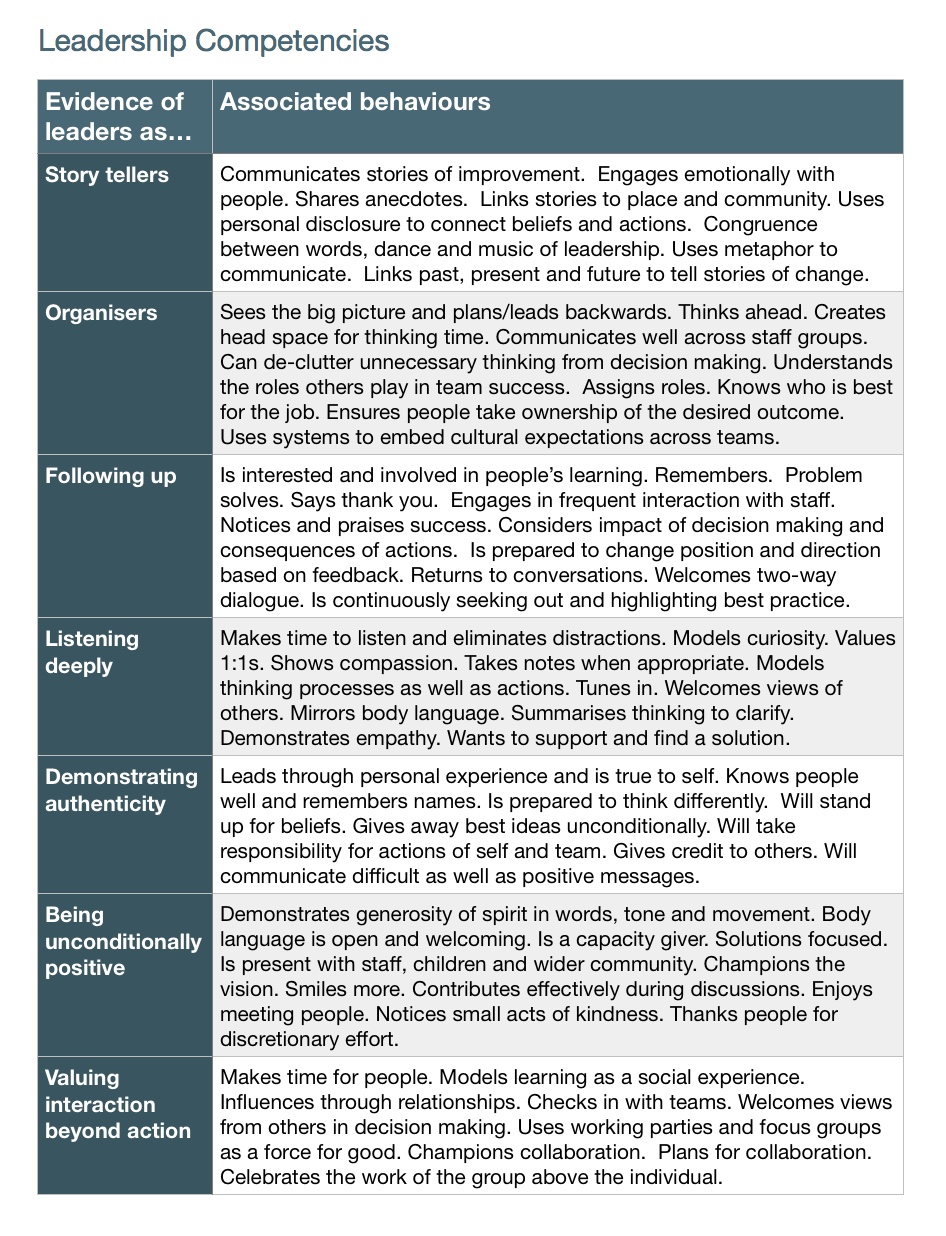 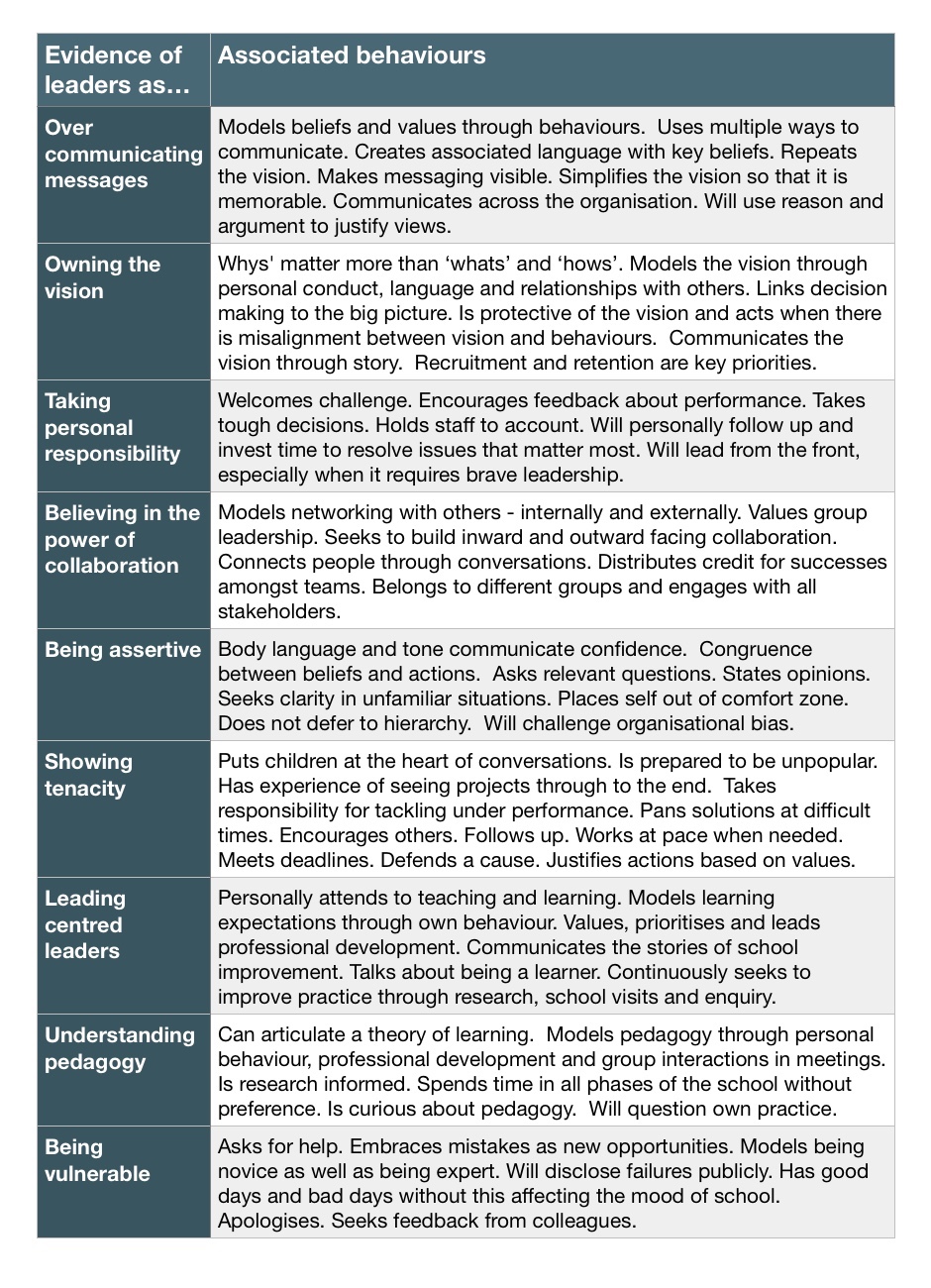 We need to champion a new kind of learning which champions teamwork, creativity and critical thinking.  Rank position and league tables are inappropriate and often unreliable as a true measure of a school’s worth.  They can be influenced by quite small differences in cohort scores, providing misleading information.  A binary assessment model, has done nothing to empower teachers to use their own judgement to identify pupils’ real next steps.  Across the globe, we are beginning to question whether assessment accountability has worked for all students and whether it has in fact become a barrier to meeting the inclusive needs of all pupils.

Relationships focused leaders lead with soul.  Like artists, they capture the small incidental moments which often pass unnoticed and build stories around these.  The way pupils are welcomed into school, the phone call home to celebrate a learning milestone, the acknowledgement of a child’s resilience when struggling to learn a new concept.  They don’t cut corners, they value the necessity of struggle and deliberately avoid the unethical practices of meddling in the dark arts of gaming results.  For the artist, the journey of his craft displaces the final finished piece in significance.